Ok, I think it’s pretty obvious here from my well declared “SINGLE GAL STATUS” (SGS) that I wasn’t the coolest cat in high school. I wasn’t making out under the bleachers, or in the QB’s beamer, or…I don’t know…where else did the popular kids who actually had sex lives in high school do things? 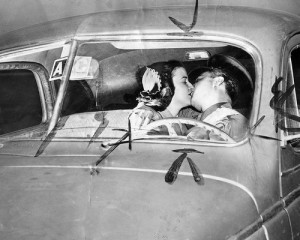 So it probably shouldn’t surprise you that I really have never had a true honest to goodness car make out. You KNOW what I mean. Like, hot and heavy, middle console style. Oh yeah. Because by the time I became cool enough for such things, I had things like a dorm room, or an apartment, yeah know…actual adult places (well, kinda) that were somewhat your own that you could actually be in without fear of your parents or the cops knocking on your window. Only an angry roommate!

But there was thing kind of alluring about making out in a car. See, the movie Titanic came out when I was just turning 11. And as most of you ladies out there realize, that is a pretty significant age (hint, hint). And Titanic was a pretty significant movie. Icebergs, Boats, Love, Sex…LEO! It had it all. How many of you have stood off the edge or side of a boat, no matter if it was a yacht, cruise ship, or canoe and yelled “I’m the King of the World!” ? If you haven’t, you’re obviously lying. Because EVERYONE has done this since Titanic came out. Everyone.

But what does that have to do with making out in a car? Nothing! But this scene does:

Apologies for the shitty quality and the fact that it is in another language. I literally have searched every combo of words for this clip, including: Titanic, Hand, Foggy, Sex, Car Sex, Jack and Rose, Dirty Car scene…hopefully youtube doesn’t get ideas.

But you know what I mean. That deliciously foggy moment when Rose’s hand slaps up on the car window and you know that’s when the real iceberg hit the Titanic (bow chicka wow wow). So what girl hasn’t wanted to do this herself….

So let’s just say I had my first opportunity for this a few weeks ago. And why pray tell would I need to make out in a car? Oh, maybe because I was staying at my parents house. And no matter how well-adjusted one should be, I’m sorry, I’m not bringing a guy into my childhood bedroom to make out with my parents next door. So the car it was.

And fun fact…cars actually fog up. Not just some Hollywood effect that is convenient for storytelling. They really do get all foggy. Well, when I saw the fog….I was in the car…I did it. I slapped my hand on that window. I had to. It’s almost like no matter how much you want to stop yourself when you get on a boat from saying, “I’m the King of the world” you can’t. No matter what you do. Now if only someone would say, “I’ll never let go” to me…but minus the whole freezing water and dying thing. But for now my Titanic dreams are quenched.

To make matters even better, I got photo proof…sent to me!

Ok…so many he will never let go..of my hand print at least! It’s a start….