Not anymore! We're all fair game!!

Guys Don’t Make Passes At Girls Who Wear Glasses. I know you have heard this before…there might have even been a Full House episode about it (which means every other show of that era did one as well). You might have even been that girl who wasn’t hit on and blamed it ON your glasses because you were always told that guys wouldn’t hit on you. Well….

FALLACY-BUSTED! (I am refraining from calling it mythbusted, as there is a TV called Mythbusters, and I am a lowly assistant with no money and don’t want to be sued…thank you). You might be asking, SSG, however did you BUST this fallacy wide open?? I am going to reveal something about myself here! I wear glasses!

Shocking! I know. But the thing is, I don’t wear them all the time. Living in beautiful sunny Los Angeles, we have a thing called “Sun Glare” which requires “Sunglasses,” thus most of the time I wear “contacts.” (I am not sure why I am “airquoting,” but that is in fact what I am mentally doing)

Blinded by the light, revved up like a deuce, another runner in the night...

But over Winter Break, I finally went to the eye doctor so that I could get some new glasses that I had been drooling over in this AMAZING website, Warby Parker. Check it out…it is cheap and easy and wonderful and they donate a pair to someone in need for every pair you buy.

So now armed with my new Geek-tacular (this is a synonym to Adorkable) look, I went out into the world. And don’t forget that I have made a resolution to be a better flirter. And apparently cute glasses are just the trick! I really can not tell you how much more attention I received when wearing my glasses…it was like guys thought I was this bold, outgoing, fun person…!! And in a weird way, because they thought it, I actually was more fun and outgoing. And because I was already “labeling” myself somewhat as geek-chic, I didn’t have to worry about being anything but myself. Which actually is a lesson for anytime any of us ladies (or gents) goes out. So remember…guys DO make passes at girls who wear glasses …and they don’t even need to be rose-colored!

By the way, it was this bitch, Dorothy Parker's fault for starting the whole guys don't like glasses thing...well she wasn't all bad! She did also say "I'm too busy fucking, and vice versa." Wowzers!

Just one last note though…I actually need glasses to SEE. Like I require them legally to get in my car and drive, to see street signs, to see a movie….to actually see the world around me. I can’t vouch for guys responses to women who wear glasses as PURELY a fashion statement. Let me know if that is in fact you…. 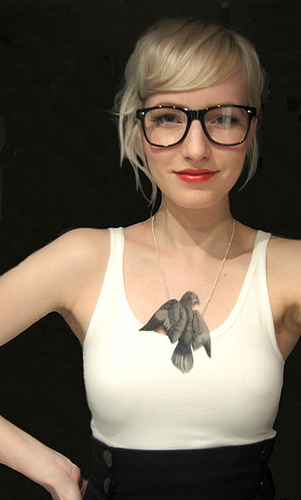 This girl is so Hipster, she even but a bird on it!

One thought on “Fallacy-Buster: Guys Don’t Make Passes At Girls Who Wear Glasses”