NO!  Get your mind out of the freakin’ gutter! I am not referring to threesomes vs. masturbation….nor am I referring to Basketball and the upcoming NCAA tournament, in which I somehow manage to do fairly well every year with little to no knowledge. No, I’m talking about dating (durrhhh…what else would I be talking about).

Well, when I was stuck in bed with mono for about a month, I obviously watched more than my fair share of senseless TV. And when you think of senseless TV, I don’t know what you think of, but my mind goes straight to Andy Cohen and Bravo! Housewives, and Matchmakers, and Top Chefs, Oh My! I love it all! So, clearly as this show was canceled and aired at like 7:00pm at night, no one else was watching Start-Ups: Silicon Valley. Well, it was about internet start ups. And no matter how pretty some of the people were, they were nerds…awkward nerds. Which doesn’t make for riveting television I guess…

So one of the nerds (maybe I should be nicer…he sold his company to Facebook on the show and is now richer than I will ever be..) well, he went to New York to visit a friend whose internet startup was based there. And this is where I found out about Grouper.

So if you have been under a rock, or already have a mate and just get a good ole kick out of my hilarious mistakes on the road to love, you probably don’t know of Grouper. Well, basically it is “Group Dating.” Imagine the idea of someone you know saying, “I’ve got someone who’s perfect for you!” And they tell you were and when to meet, but NOTHING about the other person. Meaning, no preconceived facebook stalking! But what makes this even better is that you get to bring two friends with you, and your set up brings two friends with them! Everyone is being set up! WHAAAAAA??!!!! Yup. NO longer do you have to have your friend do “the call,” the are you alive/is he cute/do you need a fauxmergency?

So I have currently been on two groupers. (btw the site doesn’t like you to call them dates…it’s a social club….they are groupers…ok). So the first one I went on, my friends and I get to our assigned location on time and awkwardly sit at our reserved table in a row of three (they make a reservation and the first drink is included in the fee). And there is one guy sitting alone at the bar…and I know in the back of my mind that he is one of the guys. And of course as ladies we start talking…probably embarassing shit….and then two guy walks up to the guy at the bar and they of course are our three men. It was actually a fairly nice icebreaker though.

And that “grouper” actually seemed to go well. Each girl was into a different guy….which obviously is a concern, right? What if all three girls like the same guy? So, yeah, it was fun. Good talk, good time. And at the end of the night, the three of us ladies gave of emails (I know..) to one of the guys. And, surprise, surprise, we actually were emailed the next day, with the two other guys cc’ed saying they had a great time! And I even got grouper point (yeah, well, actually KARMA…) saying someone had a great time! SO I emailed the guy that I liked…that I presumably was hitting it off with. And then, NOTHING. Nada. No response. Oh well.

So a feature of Grouper I haven’t mentioned is your concierge…our LA one is Lexi. Well, can I just the best part of my grouper was texting with her? Shall I post it? Yes? Ok!!!

Lexi: Hey SSG, hope things are going well! Don’t forget to take a groupergram for a shot at a free round.
SSG: They are not totally our type but nice
Lexi: Eeekk… I’m really sorry they didn’t turn out to be the best match for you girls… Hope it’s still a fun night though!
SSG: We’re talking about finding our parents porn
I hope this makes it on texts from grouper
Lexi: Hahaha, ahhh classic Grouper bonding ;-p
SSG: Haha
SSG: We got the bar to play the Dawson’s creek theme song and are singing along
Lexi: Is the bar singing along with you!??!?
SSG: No! Just us three girls and one of the boys.. And they thought you were a bot!
Lexi: A bot?! Come on now 😉
SSG: You are so not a bot!
Lexi: You know it, girl
SSG: Grouper fail
Lexi: What?! What happened? Sounded like the night was getting gooood at the Dawson’s Creek singalong!
SSG: Nope! One of the guys already left! But there might be one match happening
Lexi: Oooo! Lucky pair. Sorry to hear the guys weren’t exactly your type but so happy you were able to make a fun night out of it!
SSG: The guy that we are “stuck  talking to” as he won’t leave his friend, he told me he doesn’t trust anything I say
Lexi: Hahaha omg! Why would he say that?
SSG: He sucks
Lexi: Yiiiiiiikes
SSG: Yeah he also did a live reading of my blog.. Which was funny, but as it was about a bad date is kind if ironic
Lexi: Hahaha goodness! What are the odds.
SSG: Lets hope better next time
Lexi: We’ll make sure of it! Promise!

Ok, so clearly there where fun/funny moments. But that’s because my friends were there. Which is why even though it was a GROUPER FAIL, it was still super fun. Because I’m still always going to have fun on a night out with my girls! Especially when Paula Cole is involved…. 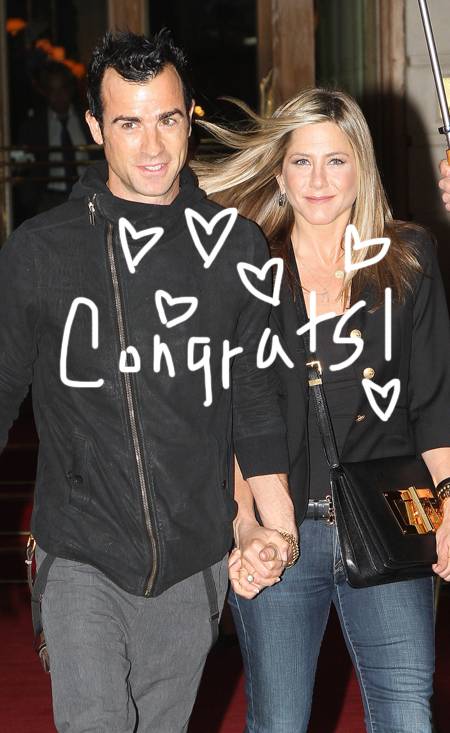 For all you Jennifer Aniston haters out there- SUCK IT! Let her be happy! She got screwed over by Angie’s demon vag that snapped away her hubby and has been the fodder of the tabloids for YEARS! Example: 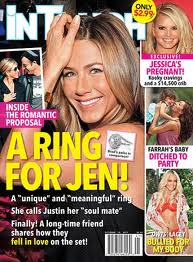 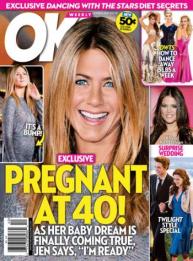 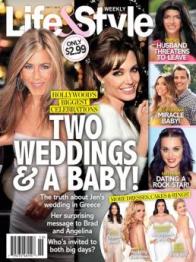 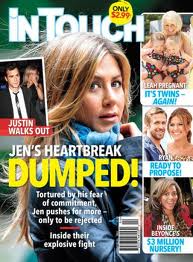 Well, as anyone who knew me growing up could tell you, I have always be a fan of Ms. Aniston. I even had a really ill-fated attempt at a “Rachel” that just did not quite look as good on me….

But Jen has proved to us SSGs that if you hold your head up high, that one day a guy will like it enough to put a ring on it !!! (Now, can i question the whole men proposing on their birthday thing? Is it to make remembering that anniversary easier?? Huh???)

To the FUTURE Patron Saint of Sad Single Gals, L’Chaim! 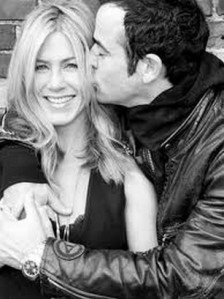 And before you say, wasn’t your last post about the other Kartrashian sister? And, bitch is rich, whatever…take a look at this cover of UsWeekly that came out this morning: 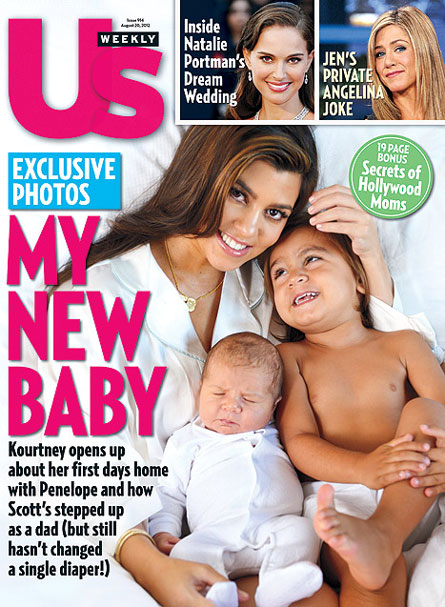 Kourtney “I will never change my last name because that is the only thing I have going for my” Kardashian, and her son Mason, and newborn Penelope “because the nickname is Penny, and you are mommy’s NEW little moneymaker” Scotland

So why is she the SSG of the Day? Well, because all of these celebrity magazine covers are pretty sad. It’s like parading your baby out n the public for the world to see. And notice who isn’t on the cover with the “Happy Fam?” You got it!!

SCOTT! He did his job, put a baby in her belly, and gave her gold and when I say gold, I really mean money, like stacks of it, in her hand, as payment for this photoshoot.) Soooo…of course he doesn’t have to change a diaper. In a year or so, Kourtney will unlock her bedroom door, Scott will “do his job,” and we will have yet another cover of UsWeekly with Scott once again missing…

Don’t let Kourtney’s Beverly Hills perfected teeth trick you…or the wads of money that are in the pillows she is sitting on. There are Sad, Single Tears under there….BUT Pimp Mama Kris keeps making sure none us see a single drop!!

Kanye West wrote a song about his LOHL (Love of His Life), otherwise known as his “Perfect Bitch.”

Maybe I’m just too sad and single to appreciate that! Or maybe that’s WHY I’m single! That’s it! Because I don’t want some misogynistic asshole calling me his bitch….!!!!Winner, Winner, Chicken Dinner! Bingo!
So from now on, I am going to work hard to perfect my “Perfect Bitch” persona….

Read more about the SCINTILLATING saga of Kanye and Kim from TMZ, who LOVES to bow down to all things Kuntrashian….